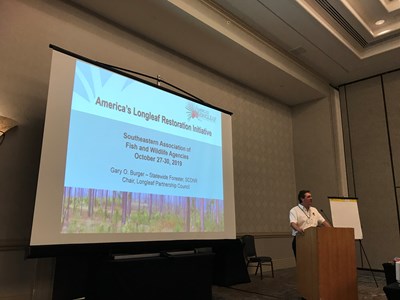 Once again, the Longleaf Partnership Council (LPC) gathered together friends and partners of America’s Longleaf Restoration Initiative (ALRI) to hold the biannual LPC meeting to discuss the past, present, and future efforts of the partnership and how ALRI can prioritize conservation actions and leverage public involvement to meet the 8 million acre goal by 2025.  This year’s Fall meeting was held in conjunction with the Southeastern Association of Fish and Wildlife Agencies (SEAFWA) annual conference in Hilton Head, South Carolina, on October 30, 2019.  Meeting alongside the SEAFWA conference provided the perfect opportunity to create connectivity with the many state wildlife agencies that work towards longleaf restoration in the southeast!

The meeting’s agenda brought LPC members up to speed about ongoing projects and informed about new initiatives taking place.  Attendees were treated to presentations on the following topics:

With the 10 year anniversary of ALRI coming up next year, logistics and additional information were provided about the approaching Shared Stewardship Celebration occurring in Washington D.C. on March 25th.

Finally, at the conclusion of the meeting, Tiffany Woods of the National Wildlife Federation took the reins as the next LPC Chair!  Mr. Burger will transition to Past-Chair and Chris Erwin of the American Forest Foundation was voted in as Chair-Elect for 2020.

The next LPC meeting will be held alongside the National Fish and Wildlife Foundation/Southern Company 17th Annual Stewardship Partners Meeting in April 2020 in Chattanooga, Tennessee.