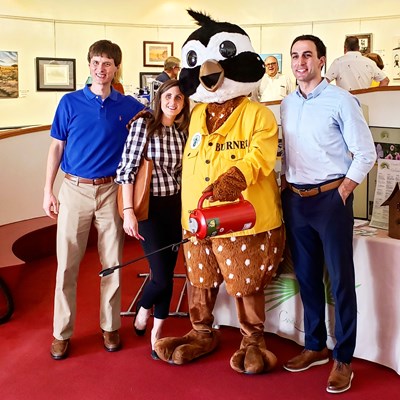 Burner Bob Has Been Busy with Outreach!

By Randy Tate, The Longleaf Alliance

Burner Bob was busy this summer getting the word out about good fire.  On July 11, Bob was the featured guest at a showing of Secrets of the Longleaf Pine in Brunswick, Georgia.  The event, also attended by the film producers, Rhett Turner and Greg Pope, drew 108 attendees and was presented by Coastal WildScapes with The Longleaf Alliance and The Nature Conservancy (TNC) as partners.

Continuing with the film theme, Burner Bob attended the Wild and Scenic Film Festival which featured a prescribed fire film session.  The Georgia Chapter of TNC organized the session.  There was a panel discussion with five land managers and six films on fire.  The films included one made by the Georgia Department of Natural Resources (GA DNR) that featured Burner Bob and Shan Cammack, Wildlife Biologist and Fire Safety Officer for GA DNR, explaining prescribed fire for kids.  This film was shot in Reese Thompson’s big woods during a live burn.

And Burner Bob has gone national with the publication of an article in Muse Magazine featuring Bob with Shan Cammack.  Muse Magazine is a national children’s magazine.  The article was in a special issue focused on wildfire (July/August edition), The Story behind Wildfires.  Muse is a sister magazine to Cricket Magazine and is geared toward 9 to 14-year-olds.

Contact Carol Denhof (carol@longleafalliance.org) if you would like to book Burner Bob for your next fire-related event.