A Thirst for Longleaf – Creating an IPA from Longleaf Pine

Josh Chapman, owner of Black Narrows Brewing in Chincoteague, Virginia, was reading his morning newspaper back in July of 2019 when a wild idea popped into his head. After reading about efforts to restore Virginia’s longleaf pine ecosystem, Chapman reached out to The Nature Conservancy with a proposition.

“Hey, I know this is gonna sound crazy,” Chapman recalls saying to open the conversation. “I really want to make a beer using this crazy longleaf pine. Do you think that's possible? Can we spare some needles?”

In short order, Chapman signed on as a partner in TNC’s OcktoberForest campaign. Joining with dozens of brewers across Virginia and the nation, Chapman helped focus public attention on the connection between forest conservation and the clean water required to brew craft beer.

Still inspired to do more, Chapman and his “crazy” idea found a receptive audience in Bobby Clontz, who manages TNC’s Piney Grove Preserve in Sussex County—epicenter of the Virginia Pinelands.

“One thing led to another, and I'm on a Gator with Bobby Clontz, and the little babies and Jen are with me,” Chapman says. “We're barreling through the Piney Grove Preserve and looking at [red-cockaded] woodpeckers, and it was a magical experience.”

Following the whole Chapman family’s tour via all-terrain vehicle of Piney Grove, home to the rare red-cockaded woodpecker, the group gathered not only green pine needles, but also collected branches, bark and cones from the ground.

With his chef’s experience and sensibilities, Chapman is especially fond of fresh, local ingredients. But pine needles? Cones? Bark? Sticks? Isn’t that taking the locavore notion a bit far?

If you’re imagining a concoction that tastes like a household cleaner, consider that several varieties of hops—a key beer ingredient—are known for imbuing “piney” notes into the flavor profile.

Chapman debuted Longleaf India Pale Ale last fall. This longleaf-infused IPA will be canned, with a label designed in collaboration with TNC. Emblazoned with a red-cockaded woodpecker perched on the trunk of a pine, each can tells the story of Virginia’s once-vast longleaf forests—and how to help bring back this critical habitat.

For Chapman, the “grapefruity notes” from longleaf impart not only a great taste, but also evoke a sense of place—in this case, of the Virginia Pinelands and the nation’s Founding Forest.

“When people come here, they get to taste where they are,” Chapman says. “The more that our beers can reflect where they come from, the better people will be and the better planet we’ll have.” 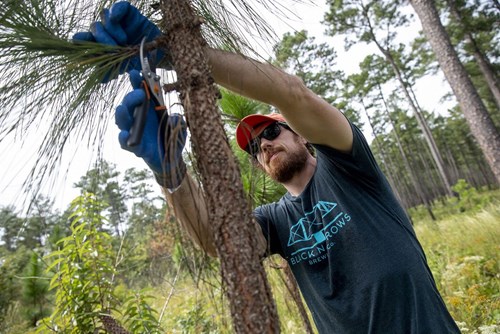 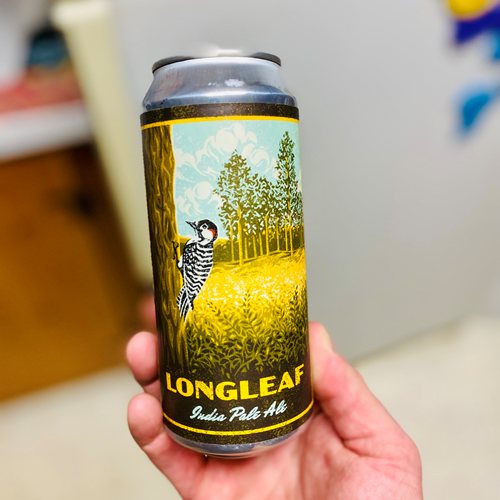 "Using longleaf pine, something so unique, gives us an easy conversation-starter for the history of the longleaf and why it matters to the commonwealth." © Kyle LaFerriere Photography