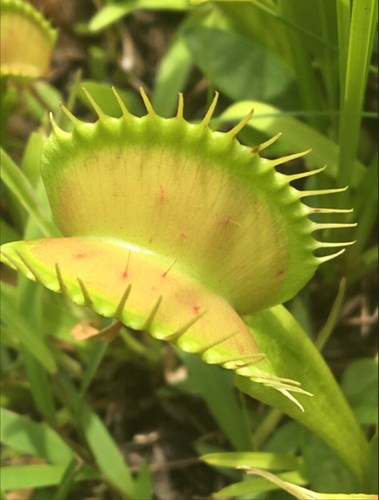 Julie Moore loves carnivorous Venus flytraps, which are only found in southeastern North Carolina and northeastern South Carolina—another really cool denizen of longleaf forests. She first encountered them in the 1980s when she worked with the North Carolina Natural Heritage Program. She never forgot about these special plants even as she worked across the country coordinating the U.S. Fish and Wildlife Service’s Safe Harbor Program.

When she returned to North Carolina a few years ago, the idea for Venus Flytrap Champions was born. The program recognizes landowners and land managers in the Carolinas who want to care for the plant that Charles Darwin once called the “most wonderful in the world.”

Moore works with a group of Venus Flytrap fans to raise awareness about the plants and find people who are working to protect them, hoping to create a network of flytrap aficionados. “We’re trying to tie as many of the players together as we can,” she explains.

Recognition is one piece of the program. Michael Fuller, who is managing forester at the Military Ocean Terminal Sunny Point, was the first recipient of a Flytrap Champion award for his work on controlled burning at the facility, which has helped flytraps thrive.

Moore hopes to recognize other champions in 2022, particularly small landowners who have backyard populations and are stepping forward to improve that habitat. “We want them to say they are going to do something good for flytraps,” she says. “They need to have a management plan or be willing to engage in some way.”