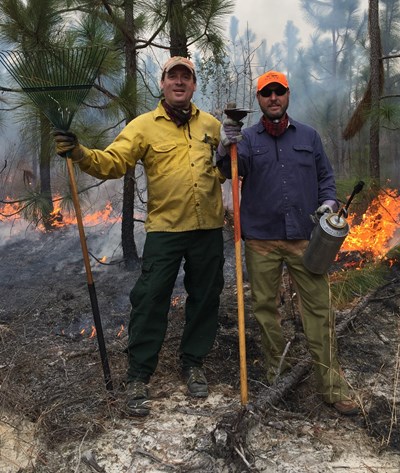 The America’s Longleaf Restoration Initiative invites you to get to know the current chair of the Longleaf Partnership Council – Gary Burger of the South Carolina Department of Natural Resources (SCDNR)!  As Statewide Forester, Mr. Burger oversees the management and restoration activities for over 280,000 acres of SCDNR-owned lands, as well as the agency’s timber sale program.

Recently, the ALRI Communications Team caught up with Mr. Burger to hear more about his background and love of longleaf pine.

1.  How did you come to be involved in the longleaf effort and ALRI?

In 2008, I hired on with the National Wild Turkey Federation (NWTF) as their National Forester.  At that time, NWTF had been in the longleaf restoration arena for a couple of years, primarily through grants from the National Fish and Wildlife Foundation’s (NFWF) Longleaf Stewardship Fund.  NWTF and NFWF were both ramping up their longleaf programs, and I was hired to manage one of the first large Longleaf Stewardship Fund grants to restore longleaf across the Southern Company’s range.  This was also the same time that ALRI was just getting off the ground and in the process of writing the range-wide plan.  I joined the writing team in the latter stages of the process and then continued to serve as an NGO representative to ALRI and the Longleaf Partnership Council (LPC) for the rest of my time with NWTF through 2012.  After hiring on with the South Carolina Department of Natural Resources, I rejoined the LPC as one of the Southeastern Association of Fish and Wildlife Agencies’ (SEAFWA) representatives in 2015 after Reggie Thackston’s retirement from GADNR.

2.  What inspires you about the longleaf ecosystem?

I suppose the same things that most of us think of: diversity within particular types of longleaf systems (plants, animals, etc.), diversity of the types of longleaf systems themselves (coastal to montane), and the inherent beauty of natural, uneven-aged open longleaf stands.  Most of my colleagues that know me well know that I have an inherent interest in pretty much all aspects of ecology: plants, birds, butterflies, snakes, mushrooms, whatever, and cultural features and archaeology.  Not that I’m an expert in any of those things, but working in longleaf restoration affords me the opportunity to touch on all of these things and learn a lot from others.  It is fascinating how many different aspects can coexist and even thrive in the right setting.  Perhaps an inter-related aspect that also draws me to longleaf is its inherent resiliency to all of the natural elements.  It just seems like the right thing to do to restore what Mother Nature intended on the landscape.  These systems maintained themselves for thousands of years, who are we to say that we can design something better?

3.  How has your career prepared you to be the Longleaf Partnership Council Chair?

I have been working in longleaf restoration since I graduated from Clemson with my BS in Forestry, where I got a good dose of longleaf and prescribed fire.  After I completed my course work for my MS and was in the process of finishing my thesis, I got my first forestry job with the Hitchcock Woods in Aiken, SC, as their first Forest Manager.  Developing and implementing a longleaf restoration program on a 2,000 acre urban forest was a real hands-on job and afforded me the opportunity to really “practice” my forestry skills on the ground.  I like to say that the Hitchcock Foundation Board and I both learned the intricacies of longleaf restoration together.  Reintroducing selective timber harvesting and prescribed burning into a mature longleaf forest was rather challenging with recreational, aesthetic, and social concerns on top of the ecological goals.  After about 12 years at Hitchcock Woods, I ventured out with my own business, Sand Hills Forestry, doing consulting and small-scale logging for a few years.  While this time was difficult for me financially, it greatly impressed upon me the challenges that loggers and forestry contractors face.  The firsthand knowledge that I gained during these few years of how the work on the ground gets done and how small businesses operate was invaluable.  I learned it the hard way, as they say.  Joining NWTF after that exposed me to several other aspects of longleaf restoration and really took my skill set to a regional and even national level.  In addition to managing longleaf grants with NFWF and a wide variety of public and private partners, I was also very active in Stewardship Contracting and Agreements with the U.S. Forest Service, most of which I learned from Dave Wilson.  The majority of my Stewardship projects were in longleaf restoration and many were substantial packages of timber harvesting and habitat restoration.  At the same time, I also managed longleaf Contribution Agreements with NRCS and Partners for Fish and Wildlife Agreements with the USFWS, and served as a liaison with the Southern Group of State Foresters.  The management skills I learned at NWTF, coupled with my prior, more boots-on-the ground jobs lead me perfectly to my current position as the Statewide Forester for SCDNR, where I manage the timber resources on roughly 300,000 acres that we own.  Many of our properties have beautiful examples of longleaf ecosystems, with mature longleaf, great groundcover, and T&E species.  Maintaining and enhancing these stands of longleaf is a high priority, but we are also actively engaged in restoring longleaf from the ground up in many places.  I am still a practicing forester on a daily basis, and I enjoy that aspect of my work and longleaf restoration the most.

4.  What has been the most rewarding experience/greatest achievement in your work with longleaf?

I am still active with the Hitchcock Woods Foundation, serving on their Forestry Committee.  Being able to see the continuation and progression of the work that I started there has been very gratifying.  Bennett Tucker has been the Forest Superintendent at the Woods now for roughly the same time as I was.  He has really taken the program to a high level of professionalism, and the Woods now serves as a model for prescribed burning in wildland urban interface, longleaf restoration, and integration of multiple management goals in a recreational forest.  I have seen this tract transformed over the years from an overgrown mature pine forest with dense hardwood midstory to a fully-functioning open longleaf-dominant ecosystem with intact groundcover.  The icing on the cake more recently has been the successful reintroduction of RCW’s to the tract, which was thought to be impossible 25 years ago when I started there.  I still live and work in Aiken County, SC, and I’ve restored a lot of longleaf in the sandhills of western South Carolina, but the Hitchcock Woods will always be one that I look to as a real success story.

5.  What are your goals as Chair of the Longleaf Partnership Council for 2019?

I am very excited about the launch of our Longleaf Ecosystem Occurrence database and the associated mapping and field work.  This is a project that has been in the making since nearly the inception of the ALRI, and seeing that these efforts are initially successful in the first four chosen focal areas is a key goal.  Laying the groundwork so that these mapping efforts can continue out into the other LIT focal areas and then the entire range of Longleaf is also vitally important.  I would also like to focus in on the slow decline in the number of acres being planted to longleaf annually.  Whether it’s just a function of the “low hanging fruit” being taken, or a broader decline in overall demand for longleaf establishment is a bit of a mystery.  I’d like to try to understand that so we can work to reverse that trend.  Just planting more longleaf is only one component of longleaf restoration, but it is vitally important, not just for the acres it adds, but more importantly, the invested landowners that it represents.  Building the grass roots will make ALRI sustainable, and helping landowners (and their families) to make the longleaf choice at establishment time can positively impact more than one generation.

6.  Why is longleaf pine important, how does it benefit communities, and how can people help the ALRI effort?

Longleaf pine is very important economically for the timber and other forest products it can produce for a landowner, and those products and the whole network of associated mills and secondary producers are all of huge benefit to many local economies, particularly in the rural areas of the south.  But there is much more than just the production of timber and pine straw.  The ecosystem benefits that longleaf ecosystems provide are essential to all people and communities in the form of clean water, clean air, recreational opportunities, aesthetics, and even natural biodiversity.  Helping to spread the word to the masses about the importance of natural ecosystems and the huge role that longleaf pine has played in the past in our country is one of the biggest things that people can do to help the ALRI effort.  That could be in the form of learning about longleaf themselves and maybe taking up some restoration on their own property or even just as simple as telling someone that longleaf is the natural pine in the south and that its restoration is important.  Learning who it is in their local area that does longleaf restoration would be a great start.  There are well-trained and highly knowledgeable longleaf folks all over the south, and they can be accessed in several different ways.  County NRCS offices are a good starting place on the local level.  The Longleaf Alliance is also a wonderful source of information for those who are interested.  We are building a culture of longleaf restoration in landowners, professionals, and practitioners and to have them serve as ambassadors for longleaf to the greater public is the most powerful way to expand the reach of longleaf.

The ALRI Communications Team would like to thank Gary Burger for taking the time to share his thoughts on the past, present, and future of longleaf! 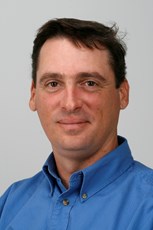 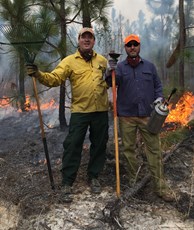