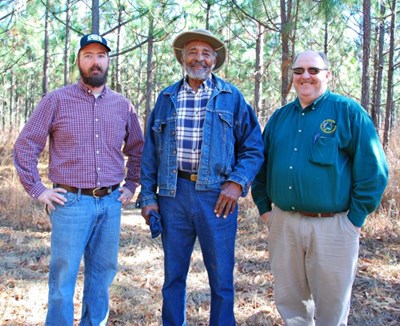 Three years ago, we met Mr. Joseph McKinney and he left a lasting impression on us. His love of the longleaf pine inspired us and his commitment to caring for the native tree on his land encouraged us in our efforts to conserve and protect the important species. Read his ‘love’ story, below.

Even as a small child growing up in rural Alabama, Joseph McKinney had an affinity for trees.

“I love trees, all kinds of trees. I love the forest,” McKinney says as he walks under a beautiful canopy on his property in central Alabama. Even though his love doesn’t discriminate against any species, he has a particular fondness for one, the longleaf pine.

“When I was a child growing up, I remember a mature longleaf forest that was just majestic. I just loved it.”

'I love all kinds of trees'

Now, several years later, he’s come back to his family’s homestead and re-established the native tree on his grandparents’ land in Coosa County, Alabama.

Through the NRCS’s Environmental Quality Incentives Program (EQIP), he was able to plant 15 acres of seedlings on his land in 2005. From there, he began his duty as a steward and nudged them to grow into their regal potential.

But, he says it has been a practice in patience over the last 12 years. When he first planted the small seedlings, McKinney worried that they wouldn’t make it. “I was frustrated because I couldn’t see the longleaf pine for all the grass. A couple of years and a (prescribed) burn later, they started to grow and have continued to grow ever since.”

Definitely a sight to see, the beautiful trees now boast an understory that is the perfect early successional habitat for wildlife such as turkey and deer.

Longleaf pine forests represent some of the world’s most unique biologically diverse ecosystems. Longleaf pine forests covered more than 90 million acres, spanning from eastern Texas to Virginia. But their range has been reduced by 96 percent, and NRCS is working with conservation partners through America’s Longleaf Restoration Initiative (ALRI) to restore this important landscape.

Joel Glover, with the Forestry Planning Committee, has worked with Mr. McKinney from the beginning and says not only is he a great advocate for trees, he’s a great ambassador in the community.

“He tells people that something’s going to be growing there. Why don’t you manage it and get something out of it instead of just letting it go.”

McKinney says he’s simply making sure he can leave his land in better condition than he found it and to leave a legacy for his children.

“We didn’t inherit this land. We borrowed it from our children. It’s about the future and not about the past.”  And, with that thought in mind, Mr. McKinney has moved his land holdings into a trust that will continue his management goals years into the future.

Since our visit in 2017, McKinney has worked with his local NRCS office to thin 160 more acres of pine forests, clear-cut 40 acres and is in the process of site-preparing to replant more longleaf pine. In addition, he has (prescribed) burned 14-acre longleaf pine stand for the fourth time and is developing a pine straw harvesting plan on those acres. He has also worked with Ryan Peek of the Alabama Forest Commission on a Forestry Conservation Activity Plan.  A Conservation Stewardship Program (CSP) participant, McKinney has completed a previous contract and has reenrolled for another five years.

By conserving, protecting and planting one tree at a time, Joseph McKinney is doing his part to ensure that we have a future full of trees.